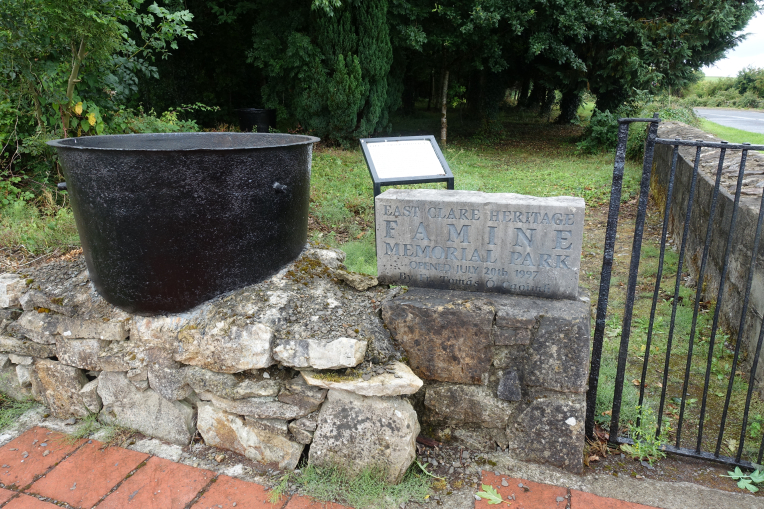 This Famine Memorial Park or “Casaoireach” at Callahy, Tuamgraney is a permanent memorial to the people who died and were “buried” here during the Famine years of the 1840’s.

Scariff  Water Tower was built in 1851 due to sanitation needs at the Workhouse. It is a six-storey stone built structure with a battlemented roof parapet. Large water tanks were located at the top of the tower to collect water, which was then pumped via a large pipe using the force of gravity back a short distance to the workhouse. The Water Tower has survived mostly undamaged.

In 1849, Scariff Workhouse had the unenviable distinction of being the most wretched and destitute in the South of Ireland.

James Rollestown, Administrator of  the Poor Law in Scariff, considered his transfer to Skibereen, Co Cork as a release – “as however great the destitution in Skibereen, it was almost nothing compared to the lamentable conditions of all classes in the Union of Scariff.”

In February 1851, the financial situation of the workhouse was so bad, there was frequently no bread, milk or even light for the sick in the hospital. There was no change of clothing and some of the sick were even without a shirt. Yet there were huge crowds on a daily basis, seeking relief and admittance. Many stayed all  night  in the most inclement weather, under the surrounding walls, without any shelter.

The starving  people came to the Workhouse in search of  food in return for work and it is generally accepted that the workhouse food was worse than whatever scraps were available outside it – basically in an attempt to dissuade people from coming.

In 1846, the rate of  famine burials in Tuamgraney and Moynoe (Scariff), was so great from the infamous Scariff Workhouse that the existing graveyards were filled to capacity.

In St. Cronan’s graveyard, Tuamgraney, hundreds were buried outside the boundary wall, while at Moynoe graveyard, Scariff,  sand and gravel was brought from the shores of Lough Derg to cover the corpses.

A contemporary account published in the Limerick Chronicle of January 6th 1847, tells its own story :

“The Workhouse of Scariff, County Clare is so overcrowded with paupers, that a disease almost amounting to a plague has broken out amongst its inmates – the deaths averaging from four to twelve daily.

It is horrifying to behold a donkey cart laden with five and six bodies, piled over each other, going to be interred and not a person attending the wretched cortege except the driver.

The graves are so dug that the coffins are barely covered with earth, rendering the air infected. No coroner’s inquests have been held.”

Under these circumstances, the Poor Law Guardians purchased three acres outside Tuamgraney and this site has become known as the Casaoireach.

The name is derived from three Irish words, cath-siar-iad, which literally means throw them back. It came about as a result of a scarcity of coffins. The coffins were rigged with a hinged bottom and when it was lowered into the grave, a lever was pulled which opened the bottom and released the body. The same coffin was then used over and over again.

Even in death, those poor misfortunate people suffered indignity.

Scariff Workhouse was destroyed by fire in 1921 by the East Clare Brigade of the IRA, to prevent it’s use as a Barracks by the Black and Tans. Unfortunately this also destroyed meticulously kept records of  the ‘social history’ of East Clare.

Due to the loss of these records, we’ll never know exactly how many famine victims were buried here but a conservative estimate would say about 7,000.

A 3 ton unused Millstone, fashioned by the inmates of the Workhouse, has been erected as a fitting memorial and a Soup-Kitchen Pot has also been placed on the site as a means of protecting it and as a stark reminder of what some of our ancestors depended on for their daily sustenance.

The trenches into which our ancestors were interred are the only real memorials and they can still be clearly seen.

This is probably the only mass graveyard in the country with only 2 memorials – one is a simple Iron Cross in memory of a travelling woman who died locally in 1958 and the other is a limestone memorial under a single whitethorn bush in memory of an 18 year old local man, who died in 1939. The last burial here was in 2002.

One corner of the graveyard is known as the “Angel’s Plot”, where unbaptized children were interred on a regular basis over the years without notification or sanction.

In Jan 2002, a small wooden shelter was erected here by a local sculptor, which symbolizes refuge, sanctuary and a connecting space between the living and the dead.

All visitors are invited to enter this shelter, rest awhile and experience a meditative, contemplative space.

The site is now a peaceful & solemn place of natural grasses and has been planted with 18 varieties of the indigenous trees of Co Clare and some shrubs.

What better way is there to remember the forgotten and unfortunate victims of the last Dark Age in Irish history than with the living gift of trees ???