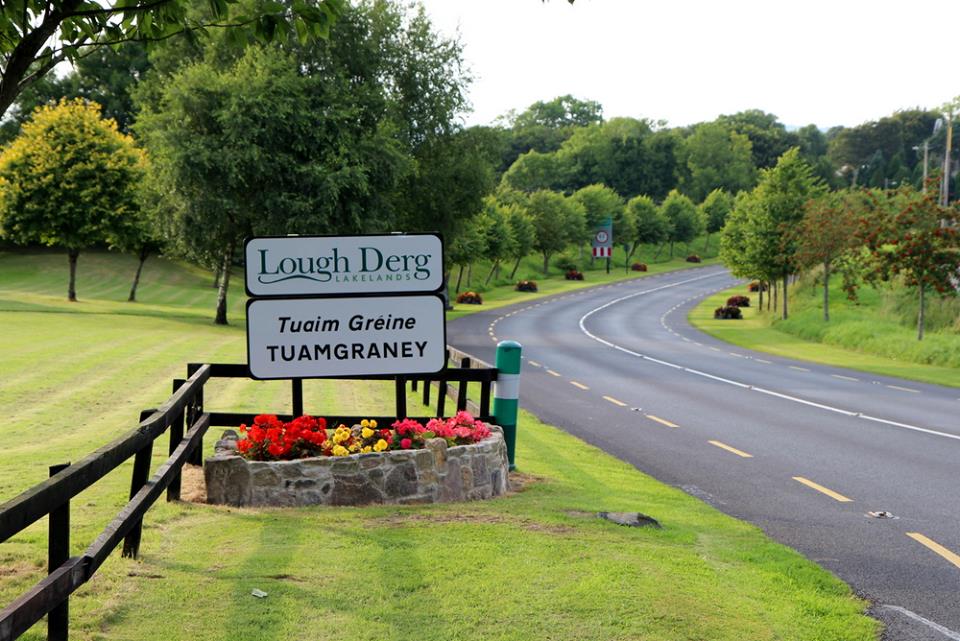 Tuamgraney and Scariff are regarded as the historic and economic heart of East Clare, strategically located between the River Shannon and Slieve Aughty Mountains. They have a rich and interesting built heritage just waiting to be explored.

Today the area continues to build on its location on the shores of Lough Derg.  Tuamgraney is an award winning village, while Scariff is a charming market town, with both having an abundance of shops, pubs, restaurants and amenities.

Tuamgraney / “Tuain Greine” / “The Tomb of Grian”  —  The name refers to Grian, daughter of a local king, who drowned in Lough Graney and whose body washed up in the village, where she is buried. In folklore, Grian was a sun goddess.

Scariff / An Scairbh / “The Rocky Ford”  —  The name  comes from the Irish “Scarbh”, which may mean either a shallow, a rocky shore or a rough ford. All are appropriate to the early town, which lies at a crossing – once of great strategic importance – on the River Graney upstream from its mouth on Lough Derg. The presence of the remains of a wedge tomb at Cappabane tells us that the area has been inhabited for at least 4,000 years.

East Clare Memorial Park – Opened in 1952 as a Garden of Remembrance to the men and women of East Clare who fought for  Independence. The focal point of the park is “The Calvary Group.” A bronze plaque has the following inscription: “Erected as a tribute to the Patriotism of the East Clare Brigade of the Irish Republican Army and the members of Cumann na mBan, who by their valour and sacrifices from 1916 to 1921,  contributed so much to the Irish Republican Cause.” It is one of the few memorials in Co Clare to honour the major role of women in the struggle for Independence.

There’s a memorial to the late Dr. Edward MacLysaght, a genealogist, historian, author & nationalist and also a memorial marking the centenary of the Easter Rising of 1916.

Another aspect of the Park  is the presence of a very large oak tree which appears to be growing out of a gigantic limestone boulder. It is truly an astonishing sight.!!!

Tuamgraney / O’Grady Castle – This 15thC Tower House, adjacent to St. Cronan’s Church,  was built by the O’Gradys, the principal ruling family of the area at that time, to afford protection to the Church. They also built many other castles in the area.

The O’Gradys  ruled Tuamgraney as well as Scariff, Mountshannon and Whitegate and were Ireland’s leading religious family and relatives went on to become Archbishops and many others held high office. Nicholas O’Grady, who died in 1485AD was  Abbot of Tuamgraney.

Tuamgraney Handball Club – Founded in 1911 and located beside O’Grady Castle. This is regarded as the home of handball in Clare and has produced numerous County, Munster, All Ireland and World Champions. The club celebrated it’s Centenary in 2011.One of its former clubmen, Pat Kirby, was a supreme exponent of the game across the world with a collection of All-Ireland, USA and World titles and was the first Irish member of the prestigious USA Hall of Fame in 1986.

St. Cronan’s 10thC Church – Has the distinction of being the oldest church in continuous use in Ireland – The Church of Ireland hold a service here on the 4th Sunday each month. Brian Ború, High King of Ireland 1002–1014 is recorded as having prayed here and  having repaired the church and long-disappeared round tower. His brother Marcan was the Abbot here in those times. The doorway – through which Brian Boru walked in the late 900’s –  is considered a marvel of early Christian church architecture. The church is open to visitors from April to September(incl).

Lime Kiln – Located beside the roadway to Reddan’s Quay, it was built in 1913 to provide lime for the Raheen Estate & other local farmers and operated until the 1950’s.

Lime Kilns were egg-cup shaped structures in which limestone was heated to a high temperature to produce lime and date from the 15th/16th C. In medieval times they were used for the production of mortar for building purposes as well as for agricultural purposes.

Lime Kilns were once common features of rural landscapes throughout Ireland. Unfortunately, most have been destroyed or have faded into the landscape, but thankfully this one here in Tuamgraney survived and much restoration work has been carried out in recent years by the Tuamgraney Development Association.

An Casaoireach/Famine Memorial Park – Opened in 1997 by East Clare Heritage on a one acre site known as the Casaoireach – pronounced Cath-Siar-Iad – translates literally as Throw Them Back.!!!

The Poor Law Guardians purchased the site as a burial ground and it’s estimated that 7,000 Famine victims were unceremoniously buried here. 18 varieties of trees representing the indigenous trees of Co Clare were planted in their memory.

The large circular memorial stone is an unused millstone, made by the inmates, intended for the mill in Scariff.  The Soup Kitchen Pot on display is a stark reminder of the daily food available to our ancestors.

St Coelan’s Holy Well – Tuamgraney is undoubtedly one of the most important ecclesiastical and historical villages in Ireland. It is mentioned in the Annals no fewer than thirty two times between the years 735 and 1582. Its pagan past is recorded in its townland names, in pillar stones and holy wells. Its monastic past is recorded in the Annals and in the lives of the Saints.

This Holy Well is located along the road that leaves Tuamgraney towards Ennis.

St. Coelan lived between 690 and 750 and was associated with Inis Cealtra/Holy Island after the death of St Caimin and probably lived on the island for some time.

This ancient well was dedicated to him and was a place of pilgrimage on the Saint’s feast day, 29th July, up until recent times. According to an inscribed plaque above the well house it was built over the well in September 1803. This building was done by order of John and Anthony Brady & sons.

St Coelan is credited with writing “A Life of St. Bridget of Kildare” and this manuscript was preserved until its destruction in the famous monastery of Monte Cassino in Italy.

Brian Boru Oak Tree – Another little interesting piece of trivia about the area… One of the Oldest Oak Trees in Ireland is located in Raheen Woods, just outside Tuamgraney Village – and it’s quite a sight to behold.

It’s a magnificent specimen and is said to be over 1000 years old – It’s said that it could have been sown by Brian Boru himself.!!! It’s part of one of the last surviving sections of Ireland’s ancient wild oak forests. The Tree Council of Ireland carried out major tree surgery in the 1980’s to prolong it’s life. It’s been described as a bit “battered but unbowed.”!!!

Edna O’Brien – Tuamgraney is also proud to be the birthplace of the world renowned author and there is a plaque in her honour at the entrance to Drewsboro House, where she was born.

Scariff Union Workhouse –  Designed by Architect George Wilkinson and opened in May 1842 at a cost of £7,450. The building was built to accommodate 600. However due to the Famine, by 1851, there were 3,212 inmates. People were housed across 17 different buildings stretching down as far as an area near the Scariff River.

In June 1921 during the War of Independence, the main building was burned  down by the IRA. This was to prevent its use as a headquarters by the Black and Tans.

Scariff Harbour – The Shannon Navigation was extended along the river using the island near the town, by closing one side, to form the harbour. In July 1842, 100 men were employed from the Scariff Union Workhouse to dredge the river, build up banks and make quays at Tuamgraney and Scariff. This navigational infrastructure helped develop Scariff as a Market Town as well as supporting other sectors such as the Steamboat Industry.

This is a secluded and sheltered harbour with berthing for some 30 craft and has a modern service block with toilets/showers, pump-out station & power/water outlets. Smartcards for access to these facilities can be purchased at the Waterways Ireland offices and at the Tourist Office in the Town Centre. The harbour is a dedicated trail head for the Lough Derg Blueway.  Smaller craft may be launched from the canoe step on the floating pontoons.

Scariff Market House – Built in the 1890’s to reflect its importance as a Market Town, it’s now used as a Tourist Office and a meeting place for community groups. The Market House is open to the public Monday to Friday and a main feature is the 1890’s working weighing machine/weighbridge.

These weighing machines were a common feature of market towns and were usually operated by the local authority. As livestock and most goods were traded by weight, these machines gave the seller and the buyer an accurate and impartial measurement. It had a capacity of 3 tons and was used mainly on fair days and market days.

Outside the Market House is a sundial with a mosaic-covered pedestal, decorated by a local artist. The Town Clock sits on a pole, adorned with designs by local children using recycled copper.

Scariff  Water Tower – Built in 1851 due to sanitation needs at the Scariff Union Workhouse. It is a six-storey stone built structure with a battlemented roof parapet. Large water tanks were located at the top of the tower to collect water.

The water was then pumped via a large pipe using the force of gravity back a short distance to the workhouse. The Water Tower has survived mostly undamaged.