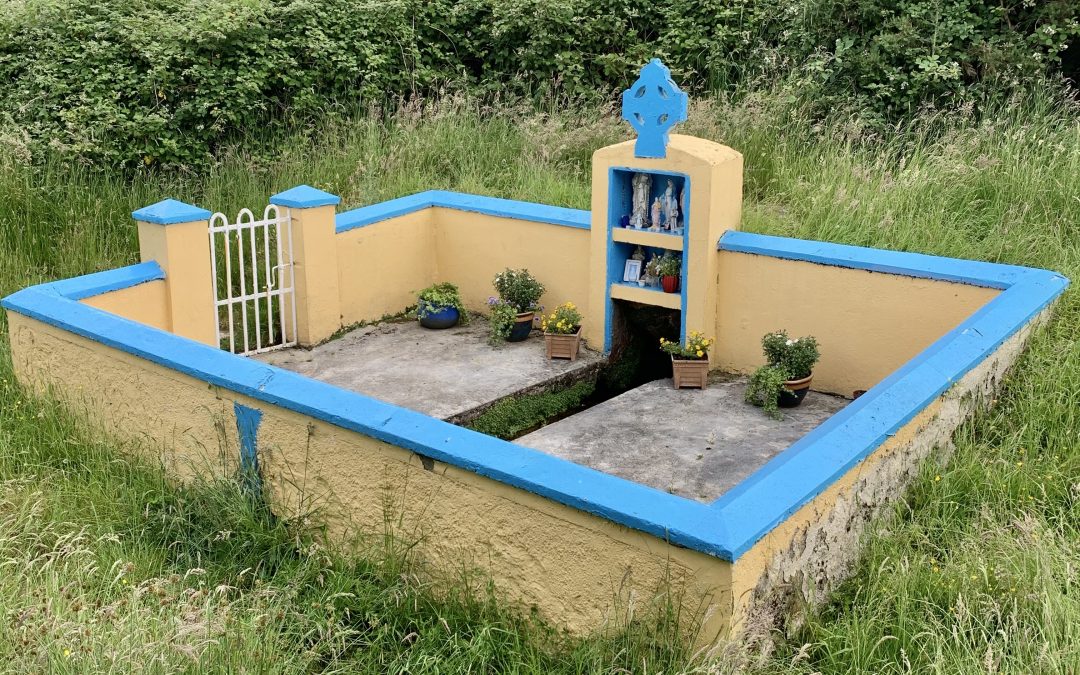 These are her words :-

“The Blessed Well is part of the heritage of Broadford Parish. Records show that a Hermit lived here, possibly during the Famine. Locals shared whatever food they had with him in return for prayers.

In the late 1930’s a local man, John Halvey, decided it was time to do something with the Well. He travelled to all houses in the Parish and beyond. A sum of half-a-crown was decided on for each house. He eventually put £13 together for the job.

The late Jack Casey Broadford (Teresa’s late Father) was employed to put a wall around the Well to keep animals out. That’s the present wall that has stood the test of time. That work was completed in 1941.

After years of weather damage, the floor crumpled away and needed a new floor. The Tuohy brothers Killaloe came and put in a new floor at their own expense.

Lots of cures have happened through praying at the well and using the water.

The locals look out for the well and especially for the 15th of August. Credit is due to Margaret Moroney for painting and maintaining this landmark in the Parish.”

The 15th of August is the Feast Day of the Assumption of Mary – Commemorates the Virgin Mary’s Assumption into Heaven – It’s a Church Holiday in Ireland and always falls on the 15th of August, no matter what day of week that might be.

The water under the shelves was used for drinking and there were 4 different sections of the well between those shelves and the outlet – These were used for treating Sight, Hearing, Taste and Touch problems.

Local man Paddy Skehan’s Grandmother was going blind and was cured after washing her eyes with water at the Well.

Sabrina, Grandniece of Elizabeth Vaughan, kept getting a Stye in her eyes and was cured after 3 visits to the Well.