Craggaunowen – The Living Past Experience – It’s not just a visit, It’s an adventure !!! 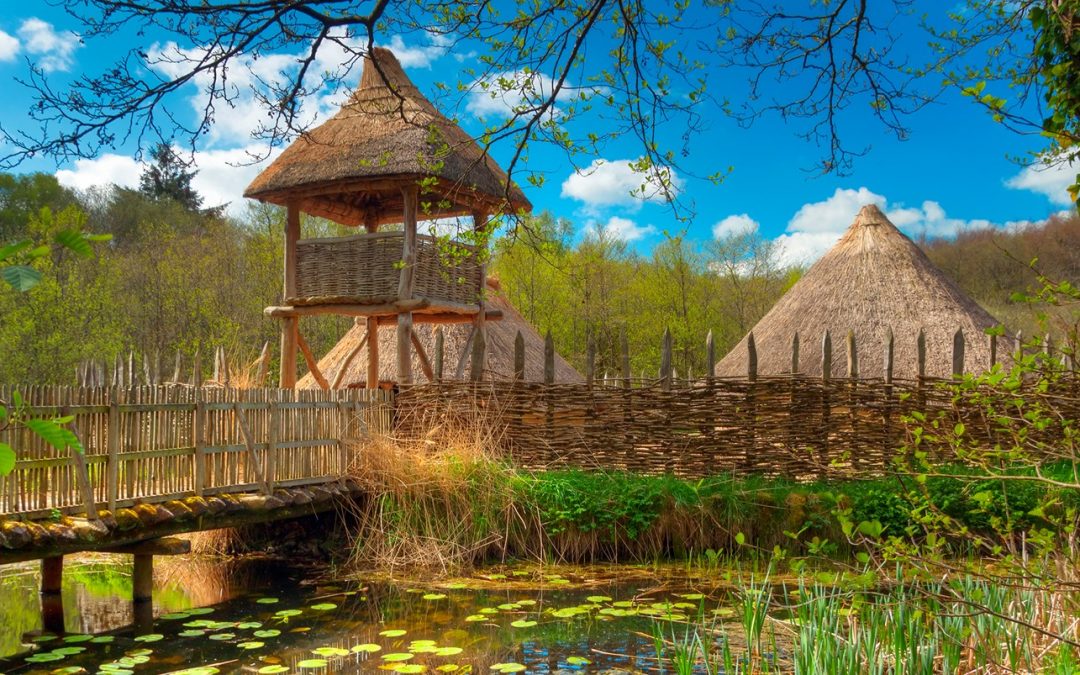 The Living Past Experience – Set in 50 acres of idyllic woodland, near Quin in Co Clare – is an award winning archaeological open air museum centred around a 16thC Castle & picturesque lake and interprets Ireland’s Pre-Historic and early Christian eras and allows us to explore the roots of the people, homesteads, animals and artifacts of our Celtic ancestors of over 1,000 years ago during the Bronze Age.

Come and enjoy the fresh Clare air and lake walks set in an enjoyable rural setting – Afterwards savour the wonderful home made fare in the charming farmhouse Tea Room.

Craggaunowen Castle was built around 1550 by the MacNamara Clan, but was left in ruins in the 17thC during the Cromwellian invasion and  was inherited in 1821 by “Honest” Tom Steele, a confederate of Daniel O’Connell, “The Liberator”.

Steele had the castle rebuilt in the 1820’s and  his initials can be seen on one of the quoin-stones to the right outside.

In the 1840’s, the castle was “in ruins” again until it was acquired in the 1960’s by  John Hunt, once described as “One of the best medievalists in Europe”.

He added an extension to the ground floor, which for a while housed part of his collection of antiquities, which now resides in the Hunt Museum in  Limerick City.

He restored the castle and built an open air style museum which features The Living Past Experience.

He later generously donated the site to the Irish people.

It stands defiantly on a crag overlooking the lake and you will enjoy magnificent views of the countryside.  Observe rare and really interesting animal breeds such as wild boar and soay sheep – specimens of the pre-historic era.

Crannog / “Young Tree” is a reconstructed lake-dwelling or artificial island on which people built houses, kept animals, and lived in relative security from enemy clans or invaders. Found in Ireland during the Iron Age and early Christian periods – though some were inhabited during the Late Bronze Age and in some cases were still being occupied as late as the 17thC.

Constructed by placing layers of stone, brushwood, tree trunks and even, old dugout canoes, on the lakebed. These were held together by wooden pilings and the platform was covered with a layer of earth or sand. On this the inhabitants built their thatched houses of wattles and mud and surrounded themselves with a protective timber fence.

Fulachta Fia (Bronze Age Cooking & Industrial site) – This type of cooking site was common throughout the country with highly sophisticated cooking techniques – a large pit, a length of rope and of course fresh meat.!!!

Hunting parties used them over a long period of time, from the early Bronze Age to the Elizabethan period. A rectangular hole was dug in low-lying land where it was sure to fill with water. This was clad on the four sides with wooden sections. Stones heated on the campfire were then used to boil the water in the wooden trough. A joint of venison was then wrapped in straw and put into the boiling water and cooked for a set period.

The Togher/Iron Age Road – This wooden track or Togher was originally laid in 148AD. It was excavated in 1985 at Corlea Bog, Co. Longford and moved here for study and display.

In some places, transport was a major problem during the Iron Age. Near the sea or rivers, skin covered boats or dug-out canoes made travel easy. In order to reach areas far from waterways it was necessary to travel through the heavily wooded or bog covered countryside. Occasionally to connect two important sites or places, wooden roadways were built across bogs or marshes. These were made by placing runners of birch or alder on the surface and covering them with large oak planks to make a road.

Ring Fort – This is a true reproduction of a farmer’s house & they were the standard type of farmstead during the early Christian Period (5th -12thC AD). Celts carried out their every-day activities as they cooked over open fires or in pits; ground corn for making bread or porridge on hand-powered querns; or made pottery, wooden bowls, goblets and platters. There are about 40,000 examples of Ring Forts throughout Ireland

The Brendan Boat –  Reconstruction of a leather hulled boat built by Tim Severin 1976/1977 who sailed across the Atlantic, re-enacting the voyage of St. Brendan(c. AD 484 – c. 577)  and the early Christian monks reputed to have discovered America centuries before Columbus 1492.???!!

He used the “Stepping Stone Route” across the North Atlantic, with stops at the Aran Islands, Donegal, Hebrides & Faroes and overwintered in Iceland and proved that it was possible for St Brendan to have made this voyage in such a craft centuries earlier.

The Souterrain – These underground passages designed primarily as food storage areas, were ventilated, but draught free.They maintain a constant temperature of around 4 degrees no matter how hot it gets on the surface. Many have secondary or tertiary chambers which are difficult to enter, thereby affording their occupants a measure of security. Some also have emergency exits, like the one here. Kids, big and small, just love them.!!!