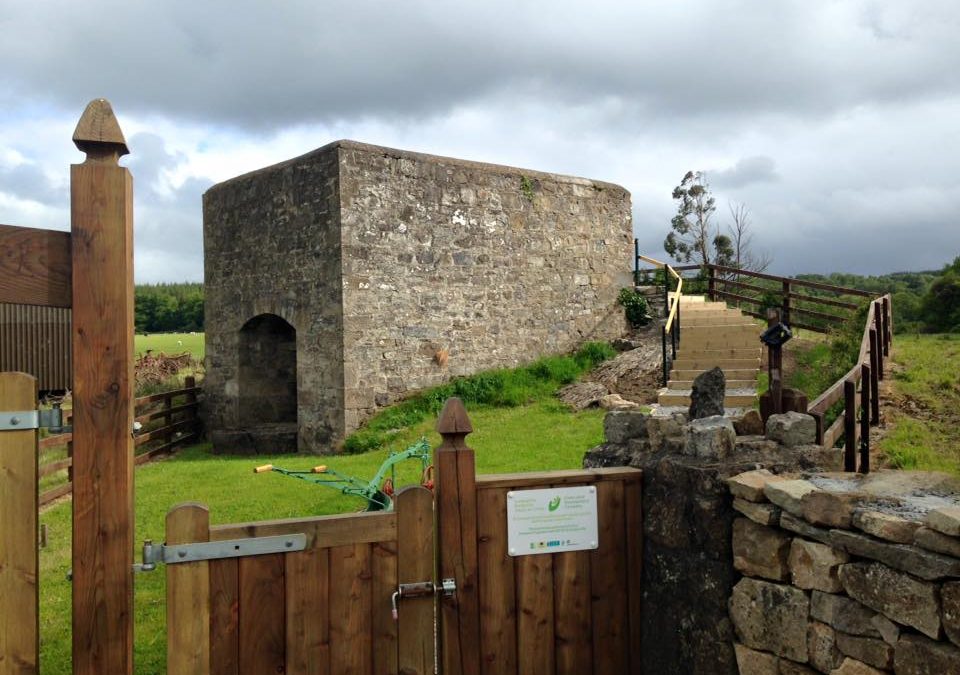 The Lime Kiln in Tuamgraney is located beside the roadway to Reddan’s Quay.

It was built in 1913 to provide lime for the Raheen Estate & other local farmers and operated until the 1950’s.

Quicklime or burnt lime, as it was also known, would have been used primarily on agricultural land to improve the quality of the land by breaking up heavy clay soil, neutralising highly acidic soil or ‘sweetening’ the grass for livestock.

Lime Kilns were egg-cup shaped structures in which limestone was heated to a high temperature to produce lime and date from the 15th/16th C.

In medieval times they were used for the production of mortar for building purposes as well as for agricultural purposes.

Lime Kilns were once common features of rural landscapes throughout Ireland. Unfortunately, most have been destroyed or have faded into the landscape, but thankfully this one here in Tuamgraney survived and much restoration work has been carried out in recent years by the Tuamgraney Development Association.

The most common type of Lime Kiln consisted of an egg-cup shaped burning chamber constructed of brick or stone with an air inlet at the base called the ‘eye’. The limestones to be burnt had to be broken into fairly uniform pieces about the size of a man’s fist (by hand or using a hammer) before they were transported to the site by horse and cart or wheel-barrow.

The burning process began with the laying of an iron grate over the eye at the base of the chamber. Then alternating dome-shaped layers of limestone and fuel (wood, furze, coal, turf) were built in the kiln chamber on top of the grate bars. When loading was complete, the kiln was kindled at the bottom and the fire gradually spread upwards through the eye into the chamber burning limestone and fuel in succession. When burnt through, the lime was cooled and raked out through the base while the fine ash dropped out and was rejected with the riddling (larger waste materials).

Because the Lime Kiln was filled from the top, and could also be unloaded from the top, access to the top was necessary. Therefore, they were generally constructed on either a rock face or earthen bank to permit this. Ramps were sometimes built to allow access also.

Paint to brighten and disinfect the interiors of house and outhouses.

Prevention of foot rot in livestock (often found in heaps at field gates).

Removal of hair from hides in leather making.

Deterrent against disease on fruit trees.

Strengthen the egg-shells from poultry.

A tradition relating to Lime Kilns can be found in Ancient Legends, Mystic Charms and Superstitions of Ireland by Lady Francesca Wilde which says:

“If a ball of worsted (fine smooth yarn spun from combed long-staple wool) is thrown into a lime-kiln and wound up till the end is caught by invisible hands, the person who winds it calls out, “Who holds the ball?” and the answer will be the name of the future husband or wife. But the experiment must be made only at midnight, and in silence and alone.” !!!