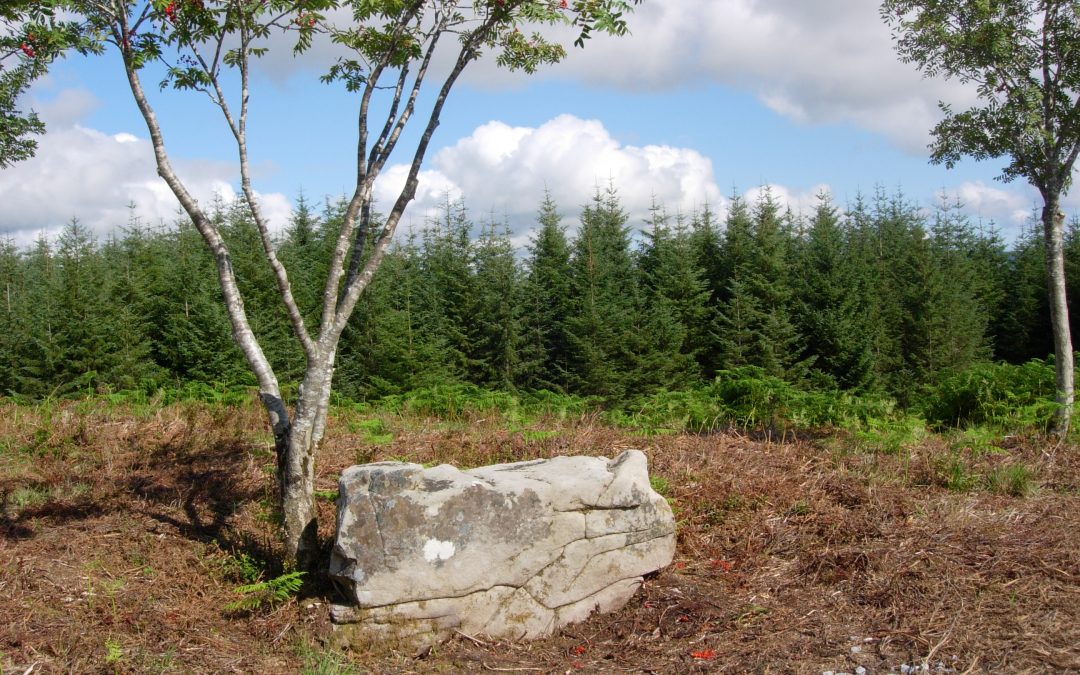 Catholic Mass Rocks, like this one here at Ballydonaghane, Bodyke,  Co Clare, are an important and emotive emblem of Irish Catholic History.

A Mass Rock (Carraig an Aifrinn in Irish) was a rock used as an altar in late 17th and 18th century Ireland as a location for Catholic Mass.

By their very design Mass Rock sites are usually in secretive places, and are extremely difficult to find. They were usually surrounded by high ground, where look-outs could be posted to watch for approaching danger.

Isolated locations were sought to hold religious ceremonies, as observing the Catholic Mass was a matter of difficulty and great danger at the time as a result of  Cromwell’s campaign against the Irish (1649/50) and during Penal times (1690’s to 1750’s). The Penal laws were passed in 1695. They are definitely not on the well beaten tourist trail but locals will know their exact location.

In many instances a stone would be taken from a church ruin, and relocated to a rural area, with a simple cross carved on its top. Because the activity was illegal, the services were not scheduled and parishioners would be obliged to spread the word of them informally.

Bishops were banished and priests had to register to preach under the 1704 Registration Act. Priest hunters were employed to arrest unregistered Catholic priests and also Presbyterian preachers, under an Act of 1709.

According to Irish folklore, priest hunters searched for Mass Rock sites in order to kill the priests they found there. Some believe they murdered the worshippers, too.

Information about Mass Rocks was passed down orally, because to have included them on the maps of the time would have legitimated the Catholic faith.

You can almost picture the procession of worshippers, in ones and twos, slipping silently through the bracken, pausing to make sure they are not being watched, climbing higher, following an overgrown trail, arriving at the meeting place where the hushed crowd awaits the arrival of the priest and the start of Mass.

The “Look-Outs” are posted on a rocky outcrop with their eyes scanning the countryside for approaching English soldiers and the people ready to scatter across the fields, scurrying their priest to safety.

“Mass Rocks are extremely important for Irish heritage and are the symbol of the penal laws and of Catholic heritage. They are what kept the faith alive throughout the penal era and if the Irish communities hadn’t gone to the Mass Rocks, the faith could have died out.

As locations of a distinctively Catholic faith, they are important religious and historical monuments that provide a tangible and experiential link to Irish heritage and tradition. However, there was never any requirement to record them. They were supposed to be a secret, so their locations have been passed down orally.

Mass Rock sites are places with deep spiritual ties for Irish people and maintain a mystique and a sense of the sacred.”