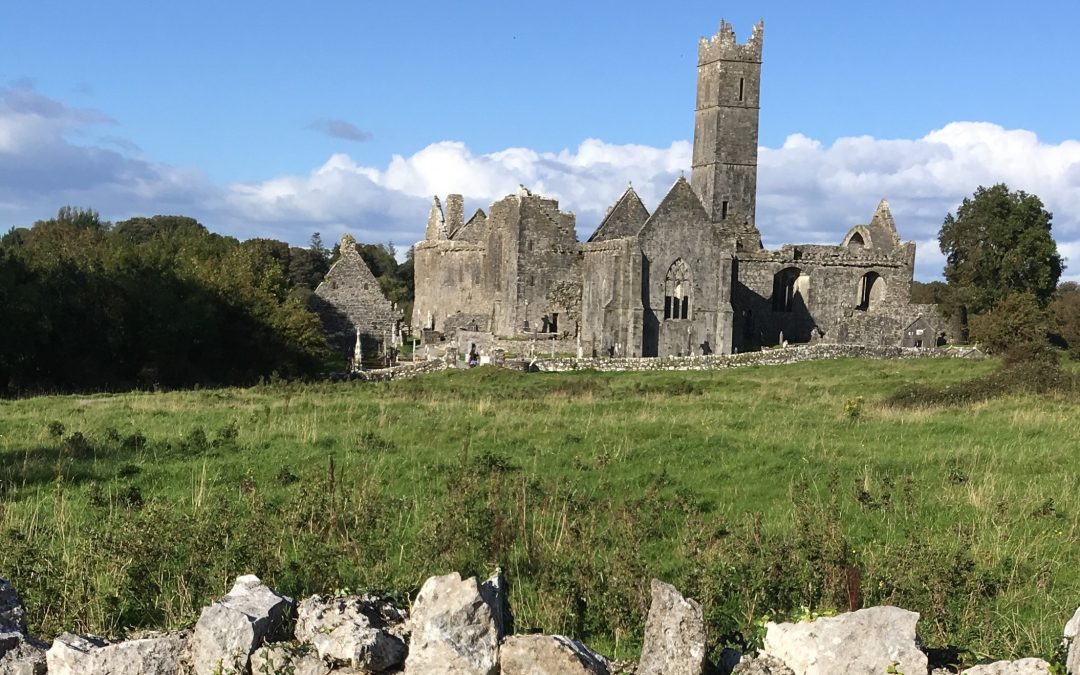 The abbey is about 9 miles from Ennis. A visitor centre is located near the building and the structure and grounds can be visited free of charge. A caretaker is permanently based at the monument. Floodlighting has recently been installed. The graveyard surrounding the friary is still in use.

Quin Franciscan friary is located on a large tract of open land near the modern Roman Catholic church in the village of Quin, Co. Clare. The friary was founded around 1402 by Síoda Cam MacNamara and became an Observant Reformed house in 1433. While many friaries were founded on the site of earlier religious houses and monasteries, Quin Friary occupies the site of the Anglo-Norman de Clare fortress that was built after 1278, and destroyed in 1318. The remains of the castle are still visible as they were incorporated into the friary, with the foundations of three of the corner towers of the curtain wall surviving to varying degrees. Despite its suppression and suffering repeated attack in the 16thC, substantial remains of the friary survive, making it one of the most intact medieval Franciscan friaries in Ireland.

The village of Quin is a fine example of a medieval settlement consisting of an impressive 15thC Franciscan friary built within the remains of an Anglo-Norman castle, a deserted village (now marked by grassy mounds), and across the river Rine a large 13thC parish church dedicated to St Finghin. As the friary is so intact, it allows the visitor to enter the world of medieval Franciscans. The medieval stone high altar remains in its original position, and to the right of this are the very rare remains of an early seventeenth-century stucco crucifixion, on the wall above a tomb. The intimate cloister, the chapter room, kitchen, refectory and dormitories stand almost as they did at the time of the dissolution.

The People involved in Quin Abbey

In 1278, the Anglo-Norman lord Thomas de Clare (c.1245-87) commenced work on a castle at Quin.  At this time, de Clare was seeking to secure his position in the kingdom of Thomond as the local O’Brien lords were distracted by internal feuding.   Quin castle was completed in 1281 when the Justiciar of Ireland, Robert of Ufford marched into Thomond to curb de Clare’s dominance in the region. de Clare was defeated at the battle of Dysert O’Dea in 1318 and the O’Briens regained control over Thomond.   The local Irish lords, MacNamaras, destroyed the de Clare fortress at Quin and later granted the site to the Franciscans.

The Franciscan chronicler Donatus Mooney recorded that Quin friary was founded in 1402 by Síoda Cam MacNamara, lord of Clancullen, who established it as his family burial place. The MacNamara tomb survives to the present. In 1433, Pope Eugene IV granted his son Maccon MacNamara permission to introduce Regular Observance at Quin. This did not involve the foundation of a new friary and the community did not become Observant until 1612.  That the domestic ranges were not bonded together suggests that they were constructed over a long period of time, rather than as one continuous building programme. Síoda MacNamara may have founded Quin in the early 15thC and Maccon MacNamara possibly added to the foundation in 1433.  Maccon died in the same year.

After the dissolution of the friary, the friars continued to live in Quin under the protection of the earls of Thomond.  They were forced to leave on a number of occasions in the 17thC but continued to return.  The last member of the Quin community, Friar John Hogan, was buried in the east ambulatory of the cloister in 1820.

History of Quin Abbey by date

1318: Thomas de Clare was defeated at Dysert O’Dea. Co. Clare by the O’Brien kings of Thomond and their allies.

1320: The MacNamaras destroyed the de Clare castle at Quin.

1433: Maccon MacNamara obtained a Papal Bull from Pope Eugenius IV to establish a house of Regular Observance at Quin.

1541: The friary was officially dissolved.

1543: The friary was granted to Conor O’Brien, baron of Ibracken, who allowed the friars to continue to reside in the friary.

1548: The friary was granted to Tadhg son of Conor O’Brien and Turlough O’Brien.

1584: During the Desmond Rebellion, Sir John Perrot (d.1592), lord deputy of Ireland, arrived in Quin to find the Franciscans still residing there.  The friary was burnt during an attack.

1612: The community was reconstituted as Observant.

1689: Thady O’Brien left five shillings to the friars in his will.

1804: The poet Tomás Ó Míodhcháin died and was buried in his family plot in the friary.

1820: John Hogan, the last Franciscan friar at Quin died and a memorial slab of limestone was placed in the east cloister walk