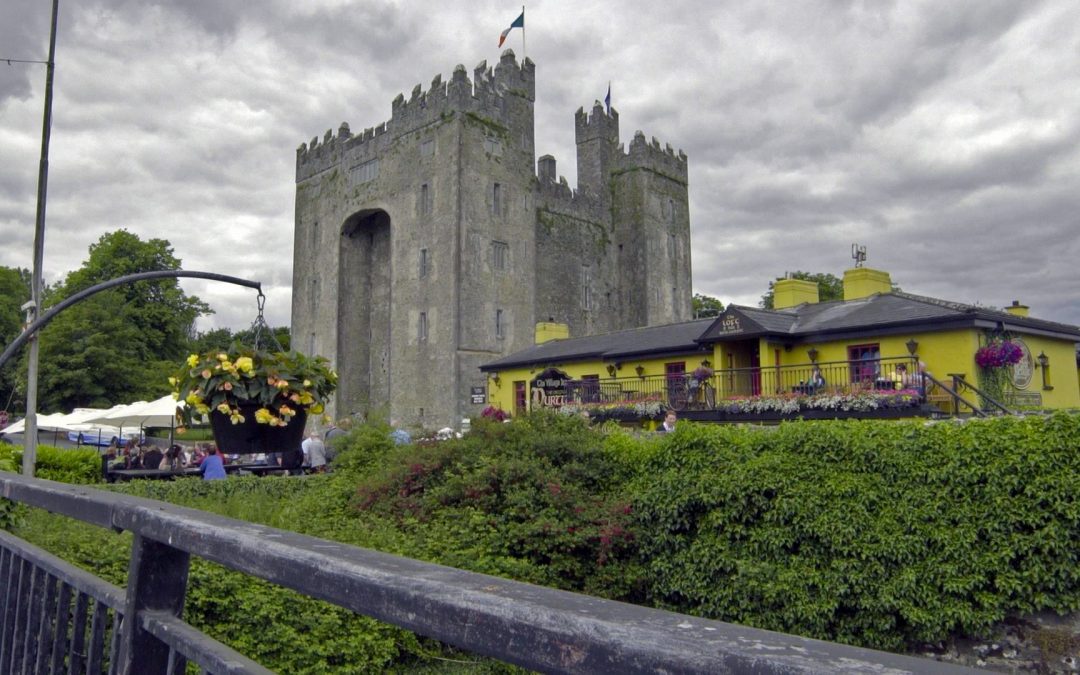 Bunratty Castle / Caisleán Bhun Raithe / “Castle at the Mouth of the Ratty” is a large 15thC Tower House located in the picturesque village of Bunratty and  is the most complete and authentically restored and furnished medieval castle in Ireland.

Bunratty Castle & Folk Park is a living working museum and for visitors is a window on Ireland’s Past. The experience includes a look at Medieval Irish life at the Castle, 19thC traditional rural living through the thatched farmhouses & life in the village street and the 18thC Bunratty House.

A typical visit varies between 1 and 4 hours.

The site on which Bunratty Castle stands was in origin a Viking trading camp in 970. The present structure is the last of four castles to be built on the site. Robert De Muscegros, a Norman, built the first defensive fortress (an earthen mound with a strong wooden tower on top) in 1250. His lands were later granted to Thomas De Clare who built the first stone castle on the site. About this time Bunratty became a large town of 1,000 inhabitants.

In 1318 Richard De Clare, son of Thomas was killed in a battle between the Irish and the Normans. His followers were routed and the castle and town were completely destroyed. The castle was restored for the King of England but was laid waste in 1332 by the Irish Chieftains of Thomond under the O’Briens and MacNamaras. It lay in ruins for 21 years until it was rebuilt by Sir Thomas Rokeby but was once again attacked by the Irish and the castle remained in Irish hands thereafter.

The powerful MacNamara family built the present structure around 1425 but by 1475 it had became the stronghold of the O’Briens, the largest clan in North Munster. They ruled the territory of North Munster and lived in great splendor. The castle was surrounded by beautiful gardens and it was reputed to have a herd of 3,000 deer. It became the capital of Thomond.

Under Henry VIII’s ‘surrender and re-grant’ scheme, the O’Brien’s were granted the title ‘Earls of Thomond’ and they agreed to profess loyalty to the King of England.

The reign of the O’Briens ended with the arrival of the Cromwellian troops and the castle and its grounds were surrendered. They never returned to Bunratty but later built a beautiful residence at Dromoland Castle – now a luxury 5 star hotel.

This is the finest collection of medieval furniture in the country.

The Castle was in ruins in the mid 20thC  and was in danger of being demolished for stone until purchased in 1954 for a nominal sum by Medievalist, Viscount Gort. Encouraged by a small group of individuals, including the archaeologist John Hunt, they set about returning the castle to its former splendour.

Bunratty Castle & Folk Park opened in 1962 and is a National Monument.

Bunratty Castle and its lands were granted to various Plantation families, the last of whom was the Studdart family. They left the castle in 1804 (allowing it to fall into disrepair), to reside in Bunratty House, which is in the grounds of the Folk Park.

The lifestyle of medieval Ireland is recaptured with our medieval banquet nights. Once the preserve of the nobility, it can now be experienced by everyone.

Over 3 million people have experienced this unique occasion since it began in 1963. Enjoy a four course meal and be entertained with music, song & dance by the famous Castle Singers. Twice nightly in high season at 5.30pm & 8.45pm.

Bunratty Folk Park – Here you’ll experience a living reconstruction of the homes and environment of the Ireland of over a century ago. Set on 26 acres, the impressive park features over 30 buildings in a ‘living village’ and rural setting. Rural farmhouses, village shops and streets are recreated and furnished as they would have appeared at that time, according to their social standing, from the poorest one-room dwelling to Bunratty House, a fine example of a Georgian residence for the gentry. This manor house was built in 1804 as home of the Studdarts, who were the last family to occupy Bunratty Castle.

Pa’s Pet Farm-Our Newest Attraction- is now OPEN and is home to some of the park’s cuddliest and cutest residents. Named in memory of Pa Crowe, the person responsible for first introducing animals to the folk park in the 1960.

Learn how to care for farm animals – baby lambs, rabbits, ducks, goats, chickens and much more – with our expert farmers.Say hello to our Falabella pony-Frank, our adopted rescue donkeys-Millie & Tillie and Irish Wolfhounds-Saoirse and Meabh.

Join our Bean an Ti (Woman of the House) in the Golden Vale Farmhouse to watch them as they prepare Irish Wholemeal Brown Bread, delicious Fruit Scones, Griddle Cake & Shannon Soda Bread.

MacNamara and Sons (Mac’s Pub) is a fully licensed working pub in the style of an old fashioned hotel bar and provides modern catering facilities. The pub reflects former times, in that it also traded in groceries and hardware.

Irish Wolfhounds inhabited Ireland long before the arrival of Christianity and the written word. They are known for being gentle, friendly and very intelligent, and our two residents,  Meabh and Saoirse, are much loved by all who visit!!!

Full of imagination, magic and fun, our interactive Fairy Trail is perfect for kids of all ages! The fairy people welcome visitors into their village but are notoriously shy and may not always appear themselves!!! Visit the Fairy University, Fairy Library, Fairy Shopping Village and much more in the surroundings of the magical forest trail.

The walled garden at Bunratty House is a surviving part of the demesne which was originally formed around Bunratty Castle.

Further features include a play ship theme, a 25m zipline, and a variety of swings. Kids/Parents are loving it !!!

On arrival you are welcomed by the “Fear an Ti” (Man of the House) who offers a drink of Irish Cream Liqueur or a glass of mead, introducing an evening of entertainment which celebrates all the best traditions of 19thC Ireland.

The delicious and wholesome four course dinner is a pleasant balance of Irish traditional dishes with musical accompaniment. Following dinner, the 40 minute show includes storytelling, dancing, and music with instrumental pieces and ballads weaving the story of Irish traditional music through the ages. Nightly from April to October, at 7:00pm.

Mr. O’Regan’s Cafe offers the finest menu, while our gift store stocks a wide range of  Aran Knitwear, glassware, perfumes, pewter, jewellery and button art. You are sure to find a treat at the right price.!!